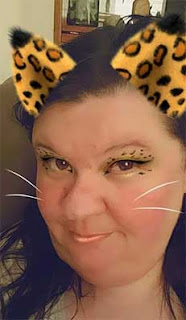 Welcome to the small piece of space dedicated to learning about me, then again you have the entire site itself to do so in general, so let me put here what you won’t find elsewhere or you will just in a different fashion.

My name is Nyx, it isn’t my given name it is a name that I was given oh so many years ago and over time it has become the name that I answer to more times than anything else. Online though I tend to be found under Nyxks mostly because it is an easy name to use and in general regards you could say it is my brand, using it to connect to me in most place online even using #Nyxks can catch my attention ::smiles::

My reason for this blog is to share with others parts of my day to day life from my struggles to my wins and everything in between that I feel others might find of various levels of interest. This blog is also aimed at giving you its reader information on various topics that I enjoy writing around and from time to time reviews on various products I have tested (been given to test or just got because I wanted to). This blog is also my way of expressing myself by showing my artwork, poetry, and on occasion pimping my business and other things that I have made to sell.

Remember you can connect with me on various platforms such as…

20 Plus Things About Me…

I graduated in 2001 with a BA in Native Studies from Trent University.

I have a diploma from Centennial College in New Media Design plus a certificate in Art Fundamentals and Digital Desktop Publishing.

I am ChildFree as apposed to being Childless, why ChildFree and not Childless? Simple I am ChildFree because I have chosen not to have children and I don’t feel less of a woman for making that choice (I enjoy being around children, I just do not wish any of my own).

Both Norman and I have worked from time to time online in a world called Second Life, I have created and sold mesh and prim based clothing. SL, as it is known, is also where we first came to know each other.

I enjoy Photography, have my own collection of photos I have taken over the years, though only recently have any of them been digital.

I consider myself to be an artist, I enjoy drawing and painting, as well as working with the electronic medium of photoshop and painter.

I’ve been into web design since 1994, though it was in 1997 that I really got into it as a way to help pay my way through university and for other essentials.

I have worked as a graphic designer and graphic artist since I was about 13 years of age. Mostly doing stuff for my dad when I was younger, and moving on to doing my own freelancing as I got older, this also helped pay for my university education and essentials.

I have a parrot, named Spirit Moon he is a Timnish African Grey.

My favorite instruments are the Harp and Native Flute, I also like Drums, Bongos, the Piano, and Acoustic Guitar. However, I can only play the bongos and piano.

I’ve taken opera lessons when I was younger and was told I was a Soprano, but with maturity would become a Colouraturist. Due to medical issues I no longer am able to sing, which is heartbreaking for me but it is part of life.

I use to be into International Ballroom Dancing, and managed to get my Bronze, Silver and Gold Medallions before I gave it up, it wasn’t fun any longer and the problems between me and the instructor were mounting enough that I was not able to continue on with her at that point in time.

I am an Insulin Dependant Diabetic, I am on Tresuba at night and Humalog – 1:5 to 1:15 is my general insulin to carb ratio.

Like my mom also have Porphyria, we both have Acute Intermittent Porphyria (AIP). There is no cure for this condition, just watching what you eat, drink and the medications you are given.

Polycystic Ovarian Syndrome (PCOS), but it doesn’t have me! I’ve not developed insulin resistance as yet because of it nor diabetes (my learning I was diabetic though having the PCOS test was a good catch on my ob-gyn part though).

Celiac, and its a learning curve to figuring out what is safe and what isn’t anymore when it comes to what I can or really can’t eat = a lot of trial and error at times.

Spinal Osteoarthritis which in general is a breakdown of the cartilage of the joints and discs in the neck and lower back. Though not uncommon as we age, getting it as young as I am that part isn’t common, yes it is normal but the degree it has developed isn’t the degree it is equivalent to someone who is in their 70s or so according to what my doc told me, sadly.

Dystonia which is a movement disorder which is characterized by involuntary muscle contractions that cause slow repetitive movements or abnormal postures.

Myofascial Pain (MPS) which is a medical way of saying diverse muscle pain with unspecific inflammation of the soft tissue, treatments vary as the effectiveness of the treatments. For me so far nothing has helped lessen the pain.

I’ve had one rheumatologist diagnose me with Fibromyalgia but he didn’t add it to my official medical file, all he did was add the above, the Myofascial Pain. So for all, I was told I have Fibro it isn’t named as such in my medical records.

I am also now a Wheelchair user, thanks to the Dystonia and to the Spinal OA that has started to interfere with my ability to walk and stand for long periods of time (even short periods of time have been affected to various degrees, sadly).

I am Pagan and have been following my own path since I was rather young, I can’t explain it because it’s just something which I have always dun and since it feels right to do it I’ve never changed and I am also a Later-Day Saint thanks to my husband Norman who has been a member since his birth (Was born and raised within it). How is that even possible you ask? Simple I make it work for my own reasons and way.

I am a Furry, which means I like to draw anthro charters, wear a fursuit (my choice of fursuit is that of a Chinese Crested/Fennec Fox Hybrid called CC or my SecondLife based self known as DeaDea who is a Pink Husky). I am NOT into the sexual side of Fur what so ever, it has nothing to do with my enjoyment of being a fur and has no place within my life as a fur.

I’m Asexual which means I do not experience Sexual Attraction, but it doesn’t mean that I don’t enjoy being with Norman or anything that is associated with being married to someone you love, so yes in the bedroom side of things they are great between the two of us ::chuckles and grins::